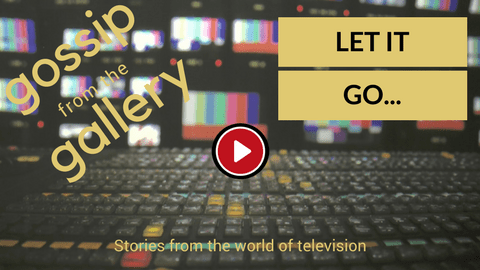 No matter how hard it was to get that shot, sometimes you need to let it go

When I got into the BBC in their IT department, but before I started working in telly, I took a week's leave and trailed a producer on Blue Peter called Richard Simpkin. Richard was a lovely guy and looked after me well. I remember sitting in edits with him, attending studio production meetings, watching him direct voice-over sessions and of course, being in the studio and sitting in the gallery as the programme was going out live.

It was on the Thursday show that I learnt about "letting go". Richard had directed a three and half minute film all about canal boats, where Yvette Fielding (one of the presenters) was doing a barge trip and talking a bit about the history of narrow boats, and it was this film that I saw him finishing off the edit and doing the voice recording for.

In those days Blue Peter used to transmit live, but they would always have an "as live" rehearsal in the afternoon. It was during that rehearsal that they realised the programme was 3 minutes too long and something had to go.

And what had to go was Richard's film.

Lewis Bronze, the then editor of the show, went through the running order and very matter of factually said "we're going to lose the canal story and add 30 seconds to the interview before". And that was it... Two weeks work gone in an instant.

When asking Richard if he was upset, he said "No, it's the best thing for the programme."

The lesson
Sometimes you need to let go of something that has taken you a lot of effort to create, because that is the best thing for the final product.