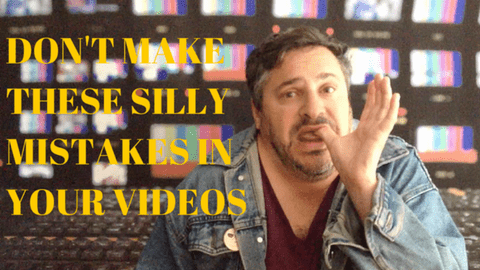 I was sitting in my office the other day, editing a children’s animation, when I heard the familiar ping of an incoming email. Normally when I’m in the flow of editing I ignore the emails, but I glanced across to check the subject line How to cut your insurance costs by 30% and was just about to hit delete when I noticed there was a video embedded in the text, so I paused…

Ok, video is my thing so of course I’m going to check it out, but…

In my experience I get considerably more opens from my

So I thought, if this guy knows about video, maybe he knows something about saving me money on my insurance too. I opened the email and clicked to play the video

getting me to open your email and engage with you

Sadly, that was as good as it got

Now I’m not going to say who the insurance salesman was, that wouldn't be fair, so lets call him Mr Jones. Inserting a video in the email was the only good thing Mr Jones did, and to be honest, he would have been better sending a text only email as the video was so bad it really put me off him and his business.

So what did Mr Jones do wrong?

I see people making this mistake all the time. Mr Jones did it and I wouldn’t be surprised if you’ve done it yourself recently. When people shoot themselves this way it is a real turn off to serious clients. Change this one thing and your videos will be so much better than the majority of videos you see on YouTube.

Tip #1: Watch this video to see what the BIGGEST mistake is

Mistake #2: The video was shot with the front camera

Unless you happen to have a top end iPhone or Android, the video you shoot with the back camera will be far better than what you get with the front camera.

Sadly Mr Jones didn’t have a very good phone and he shot his video with the front camera, which meant his video looked grainy and soft, not High Definition quality, as it would have been if he’d used the back camera.

Tip #2: Always use your phone’s back camera to shoot your videos

Mistake #3: The video was wobbly

I can picture it now… Mr Jones, sitting in his office, holding his phone, shooting himself as if he was taking a selfie. Of course the video is going to be a bit shaky, wobbly video is a real distraction and shows a lack of professionalism.

Tip#3: Mount your phone to keep is stable while you film

Mistake #4: The sound was horrible

Mr Jones didn’t use a microphone, he didn’t tell his kids to be quiet in the room next door and he forgot to turn his radio off. With all that background noise combined with the lack of a decent microphone meant I could hardly hear a word Mr Jones was saying.

Tip#4: Make sure you get the best sound you can

Mistake #5: The video was too long

Running at a cool twelve and a half minutes, Mr Jones’s video was far too long. Worse than that, Mr Jones started his video talking about himself, his contacts, all the different companies he had worked for; he was having an ego trip. Thing was, I wanted to know how I could save 30% on my insurance, not about Mr Jones, so got bored long before he got to the point of his video.

I made it to about 45 seconds because, like I said before, video is my thing and I’m interested in how people use it. Most people would have given up a lot sooner. Sadly, I never found out how I could save money.

Videos are meant to be engaging, to help build rapport and make it easy for the audience to decide if they want to work with you or not.

Sadly, by shooting himself, Mr Jones killed any chance of me wanting to do business with him