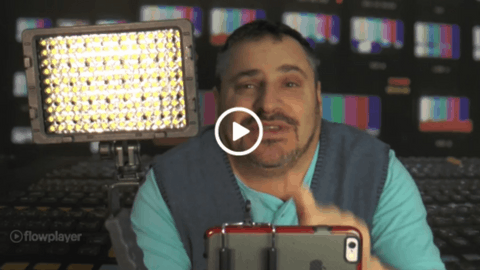 How to turn your phone into a professional video kit

For less than the cost of your phone

The video camera on your phone shoots better quality video than the cameras I used when I was at the BBC.

Let me say that again, so you get it.

When I was at the BBC we shot on the best cameras in the world, and now, that phone you carry around in your pocket, the one you check FaceBook on and send emails with, can shoot at a higher definition than the cameras I used when I was at the BBC.

To get the most out of the camera on your phone (or tablet), you need the right kit to go with it.

With the right accessories there's no need to spend a fortune on a professional video kit. In fact, I often leave my pro camera, tripod and mics at home and just take my smart phone filming kit with me when I go filming.

So when I went out to Morocco last year to film modules for my Easy Pro Video ONLINE course, and was flying Ryan Air, I traveled light.

The most important thing to get is a phone holder, which attaches the phone to the tripod. That way you can frame up correctly and keep your shots stable.

After that you need to get a decent microphone, but remember, not every microphone works when plugged directly into the phone so you may need to get an adapter.

In a future blog I will look at sound and lighting, but for now, if you want to boost the light a little, consider getting a small, battery powered LED light like I had in the film.

That's it really. And the kit I took with me in the video, well that cost me less than half the cost of my phone... So not much at all.