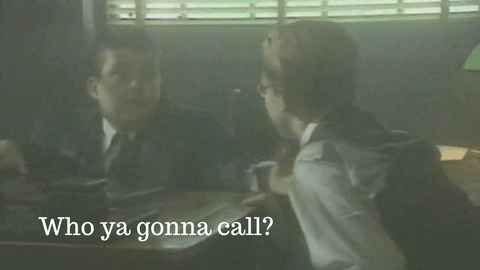 Why laughter is the best educator

They say "Laughter is the best medicine"... I agree with whoever the they are that says this... But I say more

Laughter is the best educator

I need to take you back 27 years when I first realised this. I was an Assistant Producer at the BBC working on Maths Programmes. The series was called Square One TV, which was a co-production between the BBC and the Children's Television Workshop (CTW), the makers of Sesame Street.

Now CTW are the worlds best at combing education and entertainment and Square One TV was a very successful series in the US which the BBC wanted to replicate for British kids. It was my job to write and direct it here in the UK.

We did game shows, animations and comedy sketches and before we started filming anything, a team of scriptwriters from CTW in New York flew over for a few days of meetings to go through all our scripts.

So there we are, sitting in a meeting room, with me describing a scene I had written all about recognising different sorts of graphs.

The story was about two gangsters in the early 1900s who ran the illegal licorice market, Al Malone and Bugsy Capone. Al was going through his figures with account Joe, but Joe was getting all flustered and couldn't make heads or tails of the figures.

Al grabbed Joe's collar, yanking him toward him and screamed into his face

"If you don't sort these figures I'm going to call da boys in on you!"

To which Joe whimpered "Yes, but who ya gonna call?"

Then, three kids dressed with outrageous Ghostbuster type costumes run into the building and spray graphs all over the wall, which of course Al could understand.

The guys from New York loved the sketch but they gave me one piece of very important advice. They said:

If you can make the punch line of the sketch coincide with the educational point, the kids will remember it

And for the past 27 years, I've have been practicing doing that, because people find it very difficult to remember facts but they will remember their emotional responses. So get people to laugh and the will remember.

Since leaving the BBC and building a business making training films, I focus on producing films that

You have to Engage the viewers first, or they won't really watch the video (they may sit in front of the screen but the content will wash over them). You engage by making videos with great content and high production values

You Inspire the viewers in to wanting to learn by giving them a reason why they should learn. Inspiration and why's come through the emotional response.

It is then, and only then, that you can Educate or Inform you viewers.

If you are a training organisation who would like to include video as part of you training offerings, then check out some of the training video productions I have worked on.

And then book yourself a discovery session below and lets have a chat about how I can help you engage and inspire your learners.