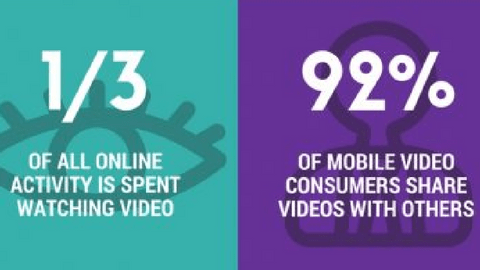 Why video is better than text

You could read this blog but...

80% of you are not going to absorb the information as well as you would from a video because you are visual learners. You need to see stuff rather than read stuff.

Your brain has to work much harder when you read text and in these days of instant gratification and quick fixes video gives the majority of consumers what they want without having to work for it.

Reading articles and watching videos require two different brain processes. When we read, the process requires us to be actively involved. The brain gets a much better workout when reading vs. watching, and the process requires a longer attention span and deeper cognitive efforts.

Watching a video, is passive. It’s much less demanding and more of an automatic process, asking a lot less energy and effort on behalf of the person watching.

If you want them to fall in love, use video

I talk all the time about engaging and inspiring your audience. The way to do this is to make videos that create an emotional response. It is much easier to become emotionally attached to something we watch in a video than something we read in an article, and from my point of view it is way easier to create a video that gets an emotional response than write an article, blog or report to get the same effect.

Ten more reasons to use video

This video was made 3 years ago and is even more true now!

And it's not all about video (although it mostly is). As people prefer visual stimulation, photos, charts and info-graphics work well too.

The only difference is Google loves video more than it loves images. SO USE VIDEO.